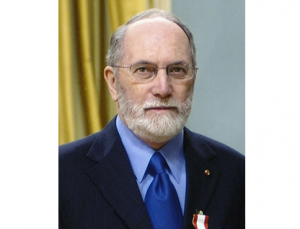 Basil Frederick Stuart-Stubbs, University Librarian at UBC from 1964 to 1981 and Director of the School of Library, Archival and Information Studies from 1981 to 1992, passed away in May 2012. Professor Emeritus and University Librarian Emeritus at UBC, Stuart-Stubbs will be remembered as a bibliophile, scholar, fierce intellect, and great leader.

Stuart-Stubbs spent his first 16 years in Moncton, New Brunswick and moved with his parents to Vancouver in 1946. He attended UBC (B.A. Hon. Phil.) and McGill University (B.L.S.). After working at McGill University Library for a few years, he returned to UBC and worked in positions specializing in collections and rare books. In 1964, at the age of 34, he was appointed University Librarian. His 17 years as University Librarian coincided with the computer revolution and the rapid growth of the staff and collections dispersed over many new branch libraries on the expanding Point Grey campus.

In 1981, Stuart-Stubbs moved to a faculty position when he was appointed Professor and Director of the School of Library, Archival and Information Studies, a position he held for two terms, and from which he took early retirement in 1992.

Stuart-Stubbs had a leadership role in many national and regional library and publishing activities. During his exceptional career, Basil took particular interest in the production and distribution of Canadian books, and was associated with several initiatives beneficial to authors and their readers, and to Canadian publishing. Significant accomplishments included:

One highlight of his professional life was a journey through Europe in the mid-1960s to acquire precious manuscripts and books using funds from the $3-million donation for UBC Library collections provided by industrialist H.R. MacMillan.

He received many awards and honours, including:

Ingrid Parent, UBC’s University Librarian and President of the International Federation of Library Associations and Institutions, has said this of him: “I had the honour of knowing Basil for many years, admiring his achievements from across the country. He was truly unique, an icon in the evolving story of librarianship in our country. I considered him to be a generous mentor, a revered colleague, and a dear friend to many. He will be missed.”

Music was Stuart-Stubbs’s lifelong passion – in particular the piano, and his collection of sheet music, recordings, and books by and about pianists. Attending concerts in Vancouver and while travelling were among his life’s greatest pleasures.

He leaves as a legacy to his family his passion for genealogy, having spent decades – partly in the pre-Internet era – sleuthing his roots and discovering the existence of many additional family members in the United States and abroad.

He passed away on May 29, 2012, at the age of 82. Several tributes have been published, including “He made books and writers a priority” in the Globe and Mail, “Basil Stuart-Stubbs: 1930-2012″ in Quill & Quire and “Remembering Basil Stuart-Stubbs” in ABC Bookworld.

Give in memory of
Basil Stuart-Stubbs

Add your memory of
Basil Stuart-Stubbs

In honour of Basil’s lifelong commitment and devotion to furthering Canadian scholarship and publishing, The Basil Stuart-Stubbs Book Prize has been established in his memory. This is a fitting tribute to a man who made such a significant and lasting contribution to UBC and to the wider world of Canadian publishing.

The inaugural Basil Stuart-Stubbs Book Prize will be awarded in the spring of 2013 to a book published in 2012. The Prize will be administered by the UBC Library and the Pacific BookWorld News Society. The latter will manage the judging process.

Your gift will honour Basil’s memory, and support current and future scholars and writers in British Columbia. Please make a donation to continue Basil’s inspiring legacy for many generations to come.