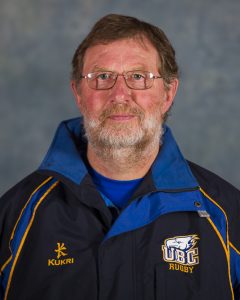 Dave Brown’s dedication to the growth of rugby, as well as the program here at UBC, knew no limits. During his time here his leadership and vision helped guide an era of unprecedented performance and success, winning every major league and cup title, as well as UBC team of the year honours in 2017. His tireless networking to reconnect alumni as well as his passion for fundraising have also ensured both the stability and sustainability of the program he loved so much. His most significant contribution however has been to the development and mentorship of the countless athletes he has impacted. His commitment to both their academic and athletic progress as well as their growth as young men was immeasurable. He will be missed.

In his five years at UBC, Brown helped steward the program to three consecutive Rounsefell Cup BC Premier League championships from 2015-17. The Thunderbirds were undefeated in the annual two-leg World Cup series against the University of California during Brown’s tenure, having extended the winning streak to six years in 2019. UBC won every Wightman Boot series against the University of Victoria with Brown as the program’s manager.

The Thunderbirds also made history by winning the first two Canadian University Men’s Rugby Championships, in 2017 and 2018.

The UBC Athletics department would like to acknowledge Dave Brown’s incredible dedication and the generous time commitment to the UBC Rugby program. The Rugby Alumni board will greatly miss his wise counsel. His character, friendship, and mentorship of coaches and players will be missed by all.

Give in memory of
Dave Brown

Add your memory of
Dave Brown

In Dave’s memory, members of the rugby community have established the Dave Brown Thunderbird Rugby Award Endowment Fund at UBC.

Your gift will pay tribute to Dave’s life and his contributions to rugby nationally, provincially and in particular at UBC, by supporting current or incoming student-athletes that display exemplary leadership, strong character and dedication to the sport of rugby.