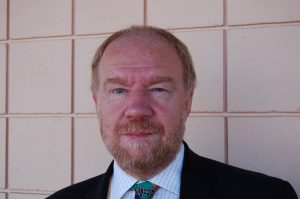 Esteemed mining analyst David Coffin was most well known as the founder and co-editor of the Hard Rock Analyst family of newsletters. Recognized for his very early insights on the rapid growth of developing economies and their impact on metals and material prices, David was a cultured, intelligent asset to the mining community.

Born in the copper mining town of Murdochville on the Gaspe Peninsula, David moved with his family to Toronto at an early age and enjoyed a happy, suburban childhood. His brother Eric recalls David’s enthusiasm for scouting, seeing in this hobby the roots of his love for learning and passing new things on to others. At age 16 he was selected as a Canadian representative to the World Jamboree in Osaka, Japan prompting a life-long interest in travel and exploration. High-school summers spent working in the bush unearthed a complementary passion for nature, which eventually led him to a career in mining. After attending the internationally renowned Haileybury School of Mines, David worked for 20 years in mineral exploration projects throughout North and Central America. In 1995 David co-founded, with his brother Eric, the HRA newsletter service. A respected markets commentator, David was a regular speaker at Cambridge House, the PDAC, the New Orleans Gold Show, as well as many other resource and commodity investment forums in North America and Europe.

David was a doting uncle and sincere friend to many, who will be remembered for his wry humour, generosity of spirit and poor punctuality. He appreciated art, fine wine and food, and truly lived life to the fullest.

David understood the importance of fostering new talent in the mining industry and the beneficial impact of continued mining in many regions. He altruistically shared his findings and insights with the community, his peers and the younger generation.

Give in memory of
David Coffin

Add your memory of
David Coffin

David was a life-long, passionate learner whose expertise in the field of mining and markets commentary was internationally renowned. He was a strong believer in nurturing the new generation of mining engineers and analysts and in the importance of education.

In honour of David’s generosity of spirit and commitment to supporting young talent, his friends and family have established a bursary fund for undergraduates pursuing a major in geology within the Faculty of Science. The David J. Coffin Memorial Bursary in Geology will be awarded in the 2012/13 Academic Session.

Your gift will support David’s commitment to helping young people get the experience required to help make tomorrow’s discoveries.