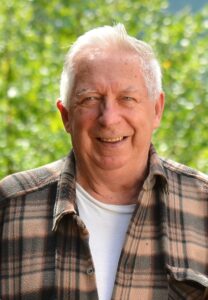 Richard (Dick) Nimmo epitomized the image of a strong, hard-working, charismatic BC logger, who lived life on his own terms. He passed away peacefully on December 31, 2019. He was predeceased by his beloved wife Yvonne and his parents Adam and Muriel. Dick will be remembered by his children Brent (Jennifer) Malcolm, Carrie (Tom Gould), Rod (Sarah), and Kirsten (Todd) Harkins, grandchildren Nicklas, Jansen, Jonas, Regan, Markus and Adam, siblings Barbara (Ken) MacCaskell, Beverley (Don Prescott), Bill (Joan), and many nieces and nephews.

Born in Port Alberni, Dick’s family lived briefly in Paldi before settling at the entrance of the new, bustling logging community of Lake Cowichan. From an early age, Dick had an aptitude for operating and “monkey wrenching” machinery. His strong work ethic and drive led to him owning successful contracting businesses as a young man, operating them from the woods of the Cowichan Valley to the forests of Northern Vancouver Island. Thanks to his loyalty and generosity of spirit, many of his employers and employees remained lifelong friends.

In his retirement, Dick enjoyed gardening, travelling, wine making and coin collecting. However, he was happiest spending time with friends and family. Dick’s children and grandchildren were a source of great pride. With them, he loved to cook, eat, drink, laugh and enjoy the view from the family home on the hill, where he lived out his life.

As a long-time member of Kinsmen and K-40 Dick made significant contributions to the town he loved. He helped build the Cowichan Lake Sports Arena and it’s fitting that his Celebration of Life be held there January 11 at 2pm. All are welcome.

Give in memory of
Dick Nimmo

Add your memory of
Dick Nimmo

In Dick’s honour, donations may be made to UBC’s Rare Disease Research Fund, which was established by his grandson Nicklas Harkins, a UBC political science student who lives with a rare disease called MPS I.