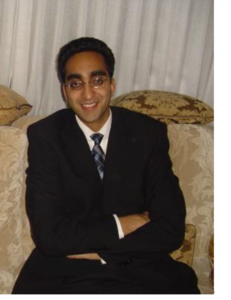 As Hamad was raised in Powell River, he enjoyed walking through nature trails and spent hours playing by the ocean. Throughout elementary and high school, he faced many health challenges, but he never let this deter him from excelling academically and socially.

Hamad was enrolled in the engineering program at UBC. In 2007, he received a Bachelors in chemical and process engineering and relocated to Calgary to begin his career as a Project Control Analyst with Suncor Energy. In 2009, he was confronted with health challenges when he was diagnosed with Marfin Syndrome and required open-heart surgery. He recovered quickly and eagerly resumed working at his career. By 2013, he built a reputation within the company as an intelligent and hardworking team member and promoted as a Trading Analyst. His natural ability to spot trends and patterns helped him excel in his role both professionally and personally.

Outside of work Hamad loved to travel and explore. He explored lesser-known regions of BC and Alberta, United Arab Emirates, England, Scotland, New York, Italy, Jordan, Oman, Pakistan. Putting his ambitions on hold, he took a pause to tend to his health, however, on May 28 2018, he suddenly passed away. He strove to be the finest at his job, to be respected as a son, brother, grandson, uncle, cousin and friend, and we are grateful for his memories and love.

Give in memory of
Hamad Ahmad

Add your memory of
Hamad Ahmad

To honour Hamad’s life and passion for chemical engineering, his friends and family have established an endowment in his memory. Your gift will pay tribute to Hamad by supporting undergraduate chemical engineering students who demonstrate academic excellence. Scholarships are made on the recommendation of the Department of Chemical and Biological Engineering (first award available for the 2019/2020 winter session).