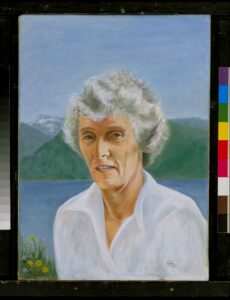 Helen Deane Butling was born at the family home (Deanshaven) on the East Shore of Kootenay Lake in southern B.C., the third in a family of seven children and the first to be born in Canada. Her parents had recently left England because her mother, who had become ill with tuberculosis, was advised to move to a drier climate and her father, always eager for adventures, was happy to try something new.

Helen spent most of her childhood at Deanshaven. The children were home-schooled with a governess and expected to help with multiple family chores and projects but she and her siblings were otherwise free to roam. They would often go on overnight fishing trips, or explore Kootenay Lake in one of the family boats, or just paddle along exploring the shoreline on home-made rafts.

Her idyllic childhood ended abruptly when, at age 14, she was sent to England to complete high school. Then she took physiotherapy training at St Thomas’ Hospital in London where she distinguished herself as both an exceptional student and, according to one of her equally outstanding classmates (Kay Macpherson), as the accepted leader of a group of talented and headstrong young women. Macpherson remembers the school matron predicting, “That group will go far.” And indeed, they did.

Helen worked at St Thomas’ after graduation until 1936 when she and her fiancé George Butling decided to join The Adelphi Centre, a commune in nearby Colchester.  Founded in 1934 by writer John Middleton Murray and pacifist Max Ploughman, it was a utopian project with socialist ideals of living and working together in a self-sufficient, agrarian community. George, himself an idealistic young architect and widower with a six-year-old daughter, was eager to join this group of intellectual activists. Helen again excelled, this time as “The centre of The Centre”, as Middleton Murray affectionately calls her in a dedication written in a book he gave her. Helen organized the household and kept things running smoothly. She married George in January 1937.

June 1939: With war clouds looming in Europe and the commune losing its focus, Helen and George decided to make a new life in Canada, starting with a summer visiting Helen’s parents at Deanshaven. But their hopes for a fresh start were soon dashed, first by the outbreak of World War Two in September, which scuttled a job prospect for George teaching architecture at McGill University, then by a personal tragedy. In the middle of the night at Deanshaven in November 1940, they woke up to the sight of flames coming up from the kitchen through the bedroom floorboards. They escaped with their children but not much else. The house burned to the ground, leaving them penniless and homeless. George had to go away to find work while Helen spent a difficult year squished into a neighbour’s small cottage, now with four children, including a baby, born just three months after the fire. Again, Helen took a leadership role. She found an affordable house in nearby Nelson with an apple orchard, a large garden, and a goat house: all a big help to the struggling family.

Two years later Helen took a job as a Nurse’s Assistant at the Nelson Hospital (later renamed the Kootenay Lake District Hospital, KLDH). But when the Matron saw her massaging a patient and discovered that she was a physiotherapist trained at a prestigious hospital in England, she was asked to set up a Physiotherapy Department, the first in western Canada outside a major city.

Helen’s 29-year career would include many more firsts, both in developing her own skills and in expanding the department.  KLDH administrator Harry Proctor, speaking at her retirement in 1973, tells the story: “A closet was found for a space, an old kitchen table for a plinth, the diathermy and an infra-red lamp were wheeled in, and Nelson had the only physiotherapy department in Western Canada outside a metropolitan setting.” And under Helen’s direction, “the department grew into a full-fledged rehabilitation department with an activation program that covered six hospitals and eight communities in the central Kootenay region.” He also noted that the success of the Nelson regional program became a model for setting up similar programs elsewhere. In 1963, following a report noting Nelson’s success, three B.C. hospitals were authorized to establish similar programs: in Castlegar, Surrey, and Williams Lake. Helen also established the first physiotherapy intern program in a B.C. hospital. When McGill University and the University of Manitoba introduced internships, she welcomed interns to her department.

Alongside these and other firsts, her reputation also rests on her exceptional skills in the more traditional practice of massage. Not only would her long fingers somehow manage to loosen every tight muscle fiber, her soothing voice would often loosen many a tongue in a tension-releasing flow of words. The combination proved exceptionally therapeutic. Her magic hands and warm heart became legendary.

In a similar vein, she pioneered Natural Childbirth methods following the Margaret Morris Program that was part of her training in England. Offered in the evening outside her regular working hours, she taught prenatal exercises together with deep breathing techniques that completely transformed the birthing experience for many a grateful woman.

Helen retired in 1973 at age 60 in order to have more time to enjoy outdoor activities. In her fifties, with her four children grown up and her marriage at an end, she had returned to her favorite childhood pastimes of fishing, hiking, climbing, and skiing, this time with an eye to conservation as well as personal pleasure. A founding member and president for several years of the Kootenay Mountaineering Club, she helped organize work parties to restore the Slocan Chief Cabin in Kokanee Glacier Park, championed the formation of the Purcell Wilderness Conservancy, and introduced many a novice to the delights of backcountry hiking, climbing, and ski touring.

Helen also joined the Alpine Club of Canada (ACC) and took several of their workshops to improve her mountaineering skills. In 1967, the ACC invited her to join their Centennial project of first ascents in the St Elias range as a member of the only all-women team. Later on, in typical Helen fashion, she celebrated her retirement in 1973 by climbing Mount Kilimanjaro.

Helen loved the backcountry lakes as much as the mountain peaks and spent many a weekend seeking them out for a day of hiking and fishing in her signature red Toyota jeep, often with the back seats filled with some of her eleven grandchildren who happened to be visiting at her summer home on Kootenay Lake. Bouncing up bumpy logging roads, driving through creek beds, and stopping to chainsaw a fallen tree were all part of the experience. In a quieter vein, she also spent many a summer evening on Kootenay Lake itself, fishing for the delectable Kokanee trout.

Helen’s four daughters followed in her footsteps with stellar professional careers of their own while also raising families: Jane took a Physiotherapy degree at the University of Toronto, Sally and Pauline earned master’s degrees at UBC—Sally in Nursing and Pauline in Humanities—and Sylvia made a career in banking.

Give in memory of
Helen Butling

Add your memory of
Helen Butling

In honour of Helen’s life and commitment to physiotherapy, her family and friends have created the Helen Butling Memorial Scholarship at UBC. Scholarships are awarded to outstanding students in the Master of Physical Therapy Program in the faculty of Medicine. Since the creation of Helen’s scholarship in 1990, 22 students have received awards, supporting them to succeed in their studies and follow in Helen’s footsteps to become the leaders of tomorrow. 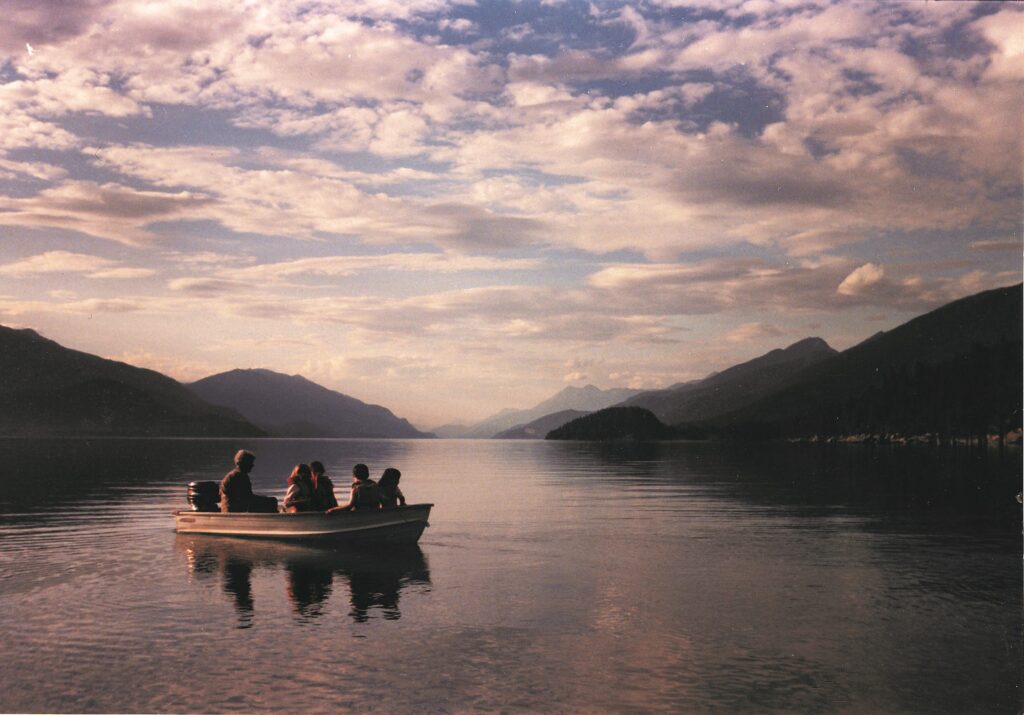 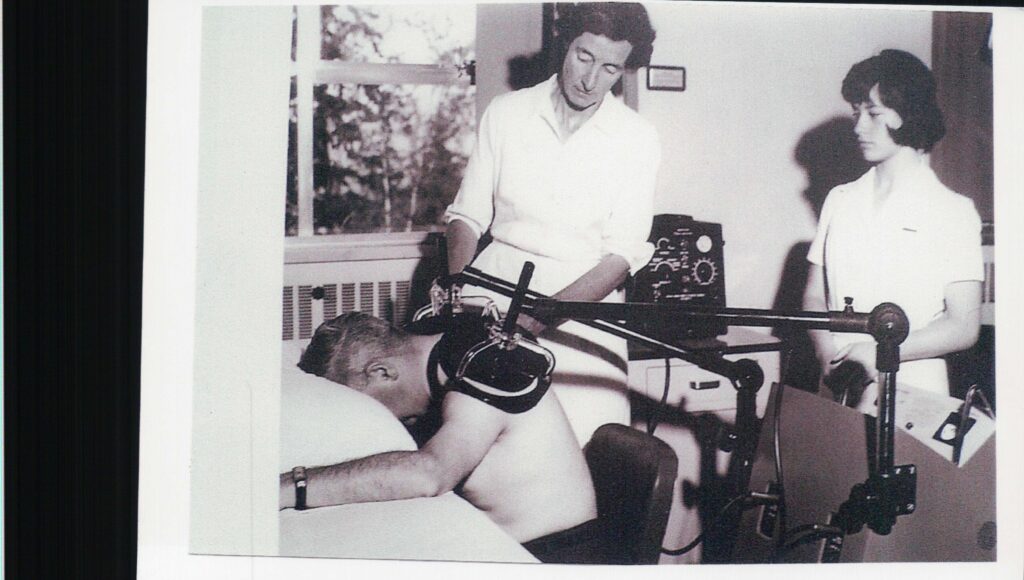 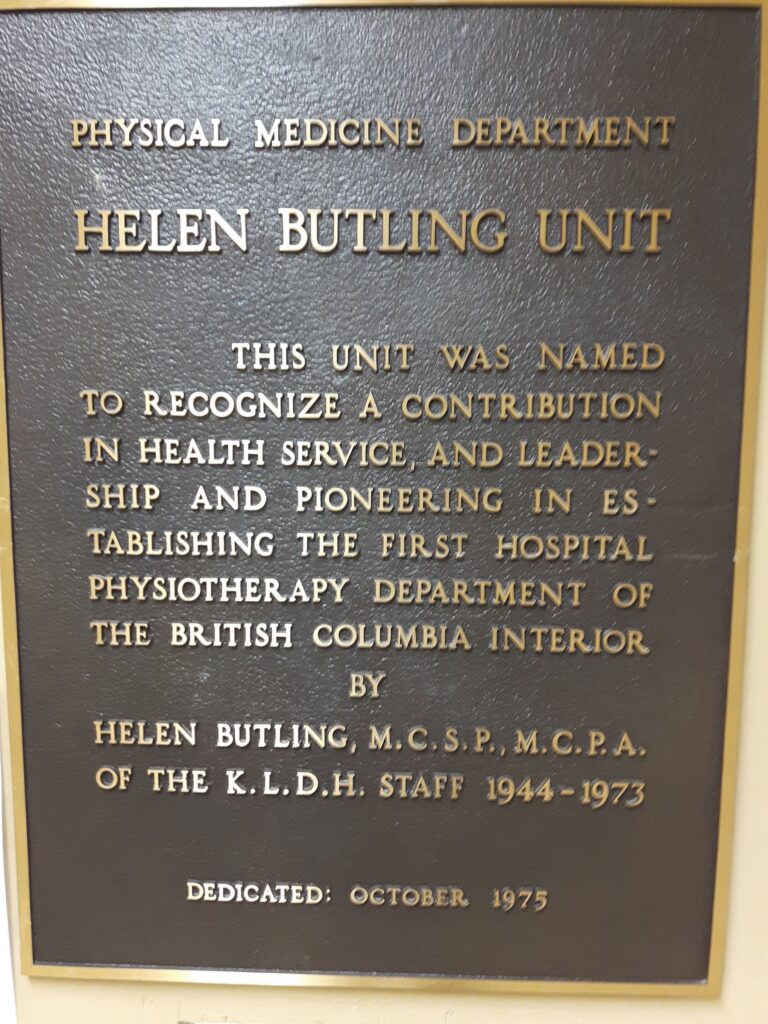 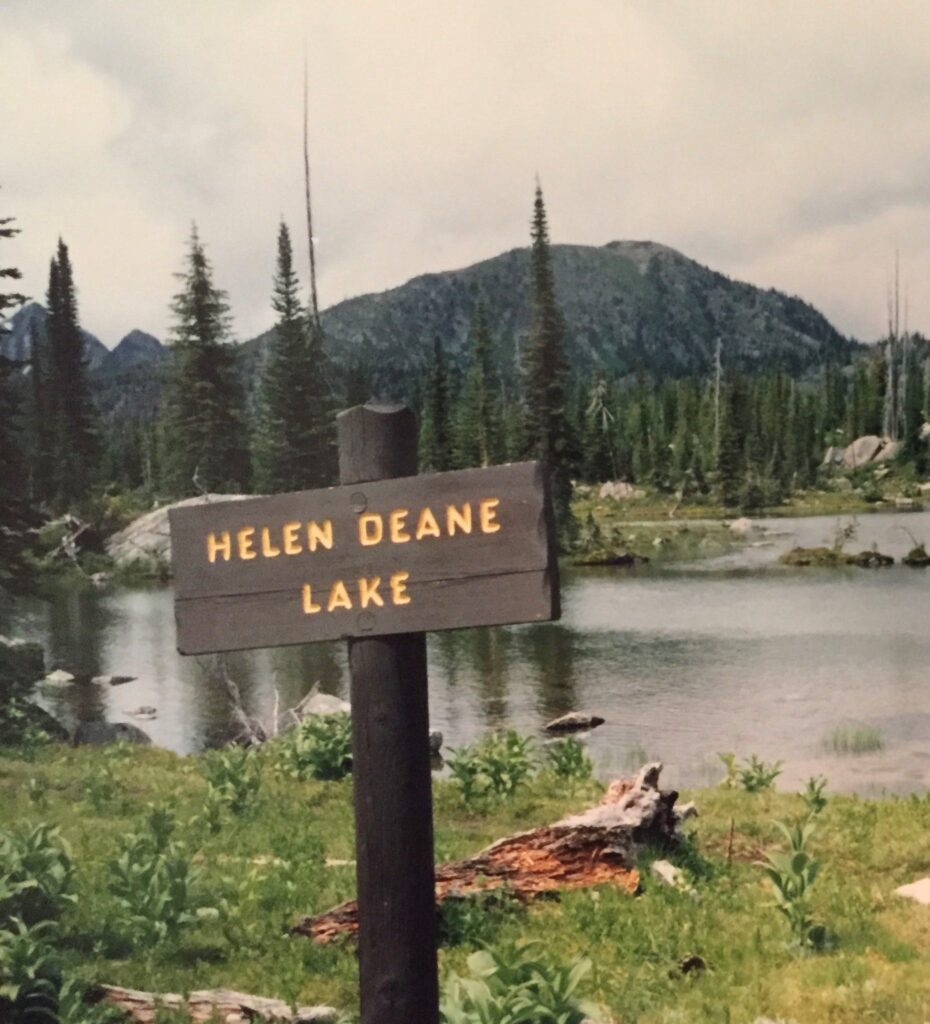 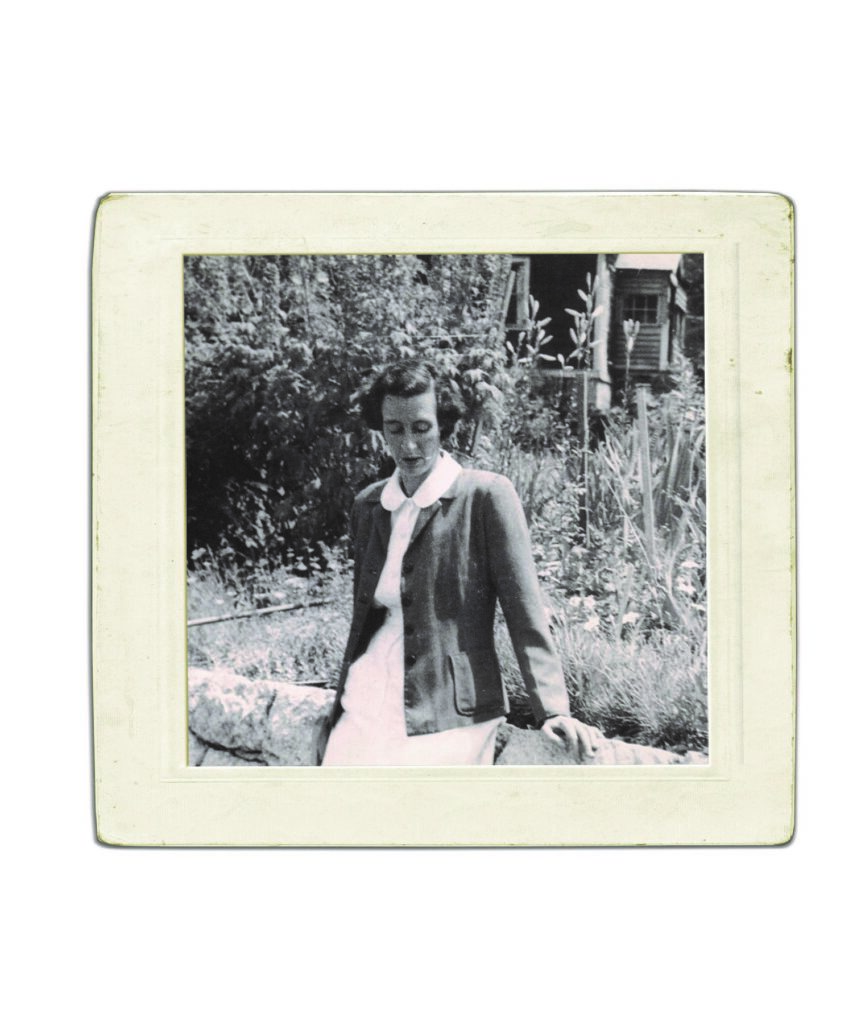 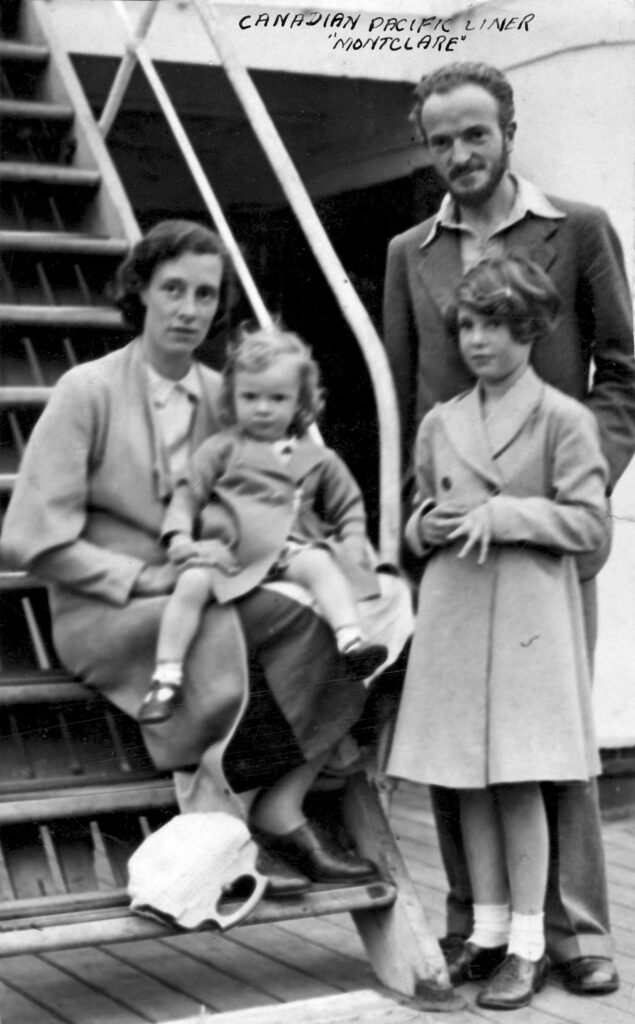