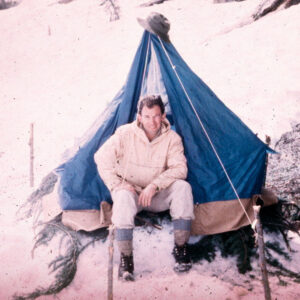 Dr. John V. Ross (March 8, 1928 – July 29, 2019) was born in Luton, England. He obtained a BSc, DIC, ARCS and PhD in Geology in London where he met his wife, Joan. John loved to tell stories, including one about finishing his PhD work on their honeymoon in Northern Scotland in summer 1953 and then travelling to London on his old Royal Enfield motorcycle in the pouring rain.

John immigrated to Canada in 1956 to begin a new life on the West Coast. He joined the University of British Columbia in the same year and became a highly respected, award winning Professor of Geology until his retirement. During his years at UBC he published a multitude of papers, primarily relating to structural geology and was the recipient of a Killam Professorship.

Both John and Joan were passionate travelers, often taking family trips deep into the wilds of British Columbia and into the mountains of Europe. An avid sailor, John would cruise the West Coast with family and friends on his boat ‘Athene’ and race in local regattas. John will be very fondly remembered and dearly missed by all.

Give in memory of
Dr. John V. Ross

The UBC Geological Field School in Oliver, BC, meant a great deal to John and his family – having taught there since his arrival at UBC, with his family often accompanying him during the 1960s. In recognition of the many wonderful memories from the school, we invite you to make a donation in support of the Dr. John V. Ross Memorial Field School Fund. The fund is being set up to benefit the field school program and its students, with final decisions on award descriptions and student eligibility being made in consultation with the Ross family.

Understanding my interest in both structural and economic geology, Dr. Ross suggested that I study the problematic history of the strata-bound Salmo lead-zinc deposits of the southern Kootenay Arc of British Columbia. I was (and still am) grateful for all the practical training, support, and encouragement that he provided. But also for the freedom to explore and apply interdisciplinary research methods to the study and pursue the results to their logical conclusion.
For all his somewhat daunting professional rigour, John was still kind and sociable toward his students, as not-infrequent gatherings at the Grad Center attested.