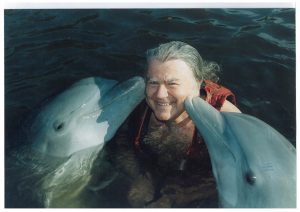 Dr. Mark Harris was a long-standing faculty member in the Department of Theatre and Film at UBC, as well as the immensely well-respected senior film critic for the Georgia Straight. He sadly passed away February 26, 2013 at the age of 62, and will be deeply missed by his family, friends and colleagues.

Mark came to Vancouver after leaving his native Montreal in 1974 with an already encyclopedic knowledge of film, an arrestingly warm-hearted laugh and a childlike curiosity. He was soon snapped up by the Georgia Straight, becoming one of their most highly regarded film critics and a leading authority on international film, and also had an appointment as programmer for the Pacifique Cinemathèque in its early days. Mark’s constantly inquiring mind and his energy were infectious, and he shared his love of film and the arts generously and ardently through his writing, teaching, and with all those lucky enough to spend time in his company. A prolific author, poet, translator and prize-winning playwright, Mark published some 4, 000 articles, essays and reviews in more than 50 periodicals, as well as the prize-winning one-act play Endserious. And, for this man who dreamed of becoming a dolphin, there was still time for fun and enjoyment of the world – Mark loved to travel, especially with his beloved wife Carola, and explore new places and cultures.

At UBC Mark was both student and teacher, earning an MA in Film Studies in 1992 followed in 1998 by a Ph.D. in Comparative Literature, for which he won a Governor General’s Gold Medal. He later taught courses for the Department of Theatre and Film, including the innovative course The Art of Subtitling, and was extremely well-liked by his students – his courses consistently being some of the most popular on campus thanks to his knowledgeable and altruistic approach.

Passionate about film, Mark was an engaging, eccentric teacher who instilled a love and appreciation of the 7th art (septième art) in his students. This passion allowed many students – and all those who knew him – to discover films that might otherwise have gone unnoticed in North America.

Give in memory of
Mark Harris

Add your memory of
Mark Harris

The Mark Harris Memorial Scholarship in Film Studies has been established by family, friends, alumni and colleagues to honour his memory and love of film.

The scholarship acknowledges Mark’s deep passion for cinema as well as his incredible energy, warmth and humour. The award will be open to both undergraduate and graduate students in the Film Studies program. In addition to academic promise, preference will be given to students who have demonstrated a passion for cinema.

Your gift will help ensure the passion that Mark brought to the Department of Theatre and Film continues to thrive, and students continue to discover films that push boundaries, exploring their own artistic existence as much as the worlds they portray.

As another Vancouver International Film Festival unfolds this year, I miss our friend Mark. He was my Go To Guy for recommendations about what to see across decades of festivals. I still remember the expression on his face as he told me I had to see Tony Gatlif's Latcho Drom back in 1993 -- he was totally enamored with that wonderful flick. Mark was a wonderful human being, one I always looked forward to seeing annually in dark movie houses across the city with his big smile and enthusiastic dialogue about what was cool that year. I miss him.

Mark was by far the best Film Studies professor I had at UBC. When you walk into a room packed of students eager to learn about silent film (some even fighting to get a seat), you know it must be because of an exceptional professor. The knowledge I got from his classes made me realize that no matter how much you are interested in a subject (and I wasn't interested in silent film at all before his class), if you have an outstanding professor, you will learn and have fun while doing it. I will forever cherish our conversations during the breaks and after class and all the incredible knowledge he shared with his students. I will never forget Mark.

Thanks to you, Mark, I am still making movies at 70. Thanks to your enthusiastic support and interest I did well in the first RGLA program (religion, language, arts & film) - B.A. 2006. I will never forget you! Dyane Lynch

- I was a student. Mark was my film mentor!
Next Previous
+ See all memories