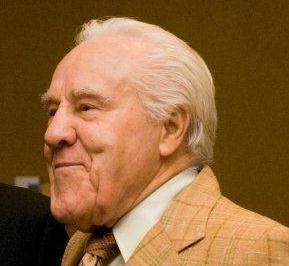 Ralph Raymond Loffmark – Professor Emeritus and former BC Provincial MLA – passed away in July, 2012, after an illustrious career in the public sector and at UBC.

Professor Loffmark graduated with a BA and an MBA, later going on to receive Law and Chartered Accountancy degrees.

He entered provincial politics in 1962, serving as Minister of Trade and Minister of Health. In 1972, after a distinguished political career, he returned to UBC as a commerce professor.

At UBC, he specialized in teaching law to Commerce students, and was the author of the book Tax and Estate Planning and other related works. He received a Master Teacher Award in 1975 – an achievement of which he was very proud – became Professor Emeritus in 1985 and continued to teach at UBC until 1990.

Ralph was instrumental, in setting up the UBC Portfolio Management Foundation (PMF), along with Dean Peter Lusztig and co-founders Murray Leith Sr., Michael Ryan and Milton Wong. The program provided undergraduate students real-world experience in financial investing, and has been a significant success at the Sauder School of Business. It continues to be recognized as a major achievement that would not have come to pass without Ralph’s vital input and expertise.

Give in memory of
Ralph Loffmark

Add your memory of
Ralph Loffmark

In honour of Ralph’s memory and legacy, a memorial fund has been established in his name to provide support for the Sauder School of Business.

This is a fitting tribute to a leader of Ralph’s stature. Ralph was a strong believer in the importance of an education, as was apparent in his long-term commitment and dedication to his students and the importance he placed on his teaching. Ralph also understood the financial constraints that can come between a student and an education – he himself overcame significant financial hurdles to pursue his own educational goals.

Your gift will honour Ralph’s memory and provide support to the ongoing work of the Sauder School of Business as it educates the next generation of business and political leaders in BC and beyond.